I wanted to match the pedals of my Model 3 to those provided as stock on the full performance upgrade. So I opted for this much cheaper aesthetic DIY mod. Also the stock black rubber pedals makes the car look so cheap.

For the accelerator and brake pedal, my only requirement was to have them sturdy and well fitting so as to avoid and unexpected acceleration or braking snafu. I purchases these from amazon for $16:


For the dead pedal, it was all for aesthetics, so fit and finish was important and I purchased this, again from amazon for $14. Installation was super easy, took about 10 minutes in all...

The dead pedal cover came with some genuine 3M double sided tape which was awesome since a lot of these accessories come with cheap tape these days. The aluminum was very thin and initially I was concerned but when I went to install it, it all made sense why it needed to be skinny.
Without the aluminium the dead pedal looks so cheap and simply functional, specially because the ambient light shines down there.
Removal of the dead pedal was super easy. Simply pull up on the entire pedal, there are three batches of clips that insert into the styrofoam as shown below, - top, middle and bottom: 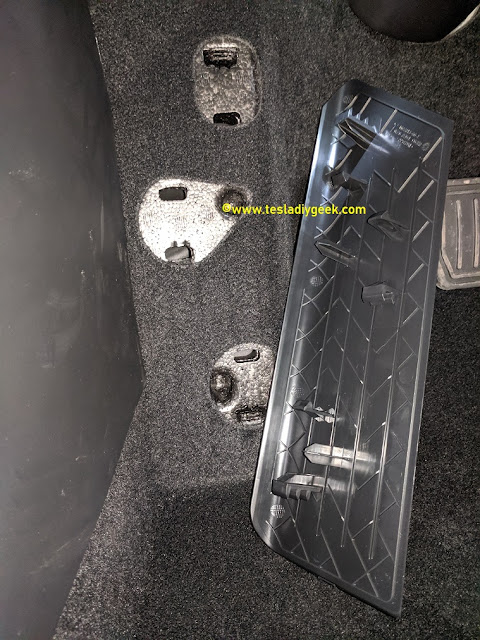 The fitting of the aluminium cover was pretty good except for the very top edge was not lined up. However, this did not matter since the top goes up pretty high in the foot well and is invisible, as there were no sharp edges. The thinness of the aluminium pedal cover ensured that the black ridges came through nicely.
The fitment from rear also looked great
The next step was to clean the surface with some rubbing alcohol and installing strips of 3M double sided tape on the back of the aluminium cover
Firmly pressed the cover on the pedal and applied pressure for 30 seconds on the tape. As can be seen the ridges came though even with the 3M tape applied. Good thing, otherwise, it would be super useless if the ridges became indented. Good design
Installation is as easy as removal, simply press in the dead pedal back into the styrofoam. The trim looks great especially when the foot well/ambient light shines it up. I liked the matte look as I am not a fan of shiny chrome.
Now the rest of the pedals looked really ugly. Glad I bought replacements for these concurrently.
Removal of the other pedal covers was easy too. The brake pedal cover simply pried off from all 4 sides, and the accelerator pedal slid up to be removed. Fitment of the replacement pedals was very good.
Once replaced the pedals, looked really good. Not sure how much the Tesla OEM aluminum pedals would cost, but for spending $30 and 10 minutes, I was pretty delighted with the outcome.
Job done! On to the next DIY project.
Posted by GTR Tech
Email ThisBlogThis!Share to TwitterShare to FacebookShare to Pinterest
Labels: Accessory, DIY
Newer Post Older Post Home