I installed these on my Infiniti and it added a little class, they were nice and bright, so I figured why not do the same for the Model 3.
Oh boy was I wrong! Not only were these units super cheaply made (no doubt to get to market quickly), but disconnecting the stock puddle light from the Model 3 gives an error message and invoked manual door release. This caused the glass to come down and not go up until a light was replaced.
This indeed had further important quality implications ... 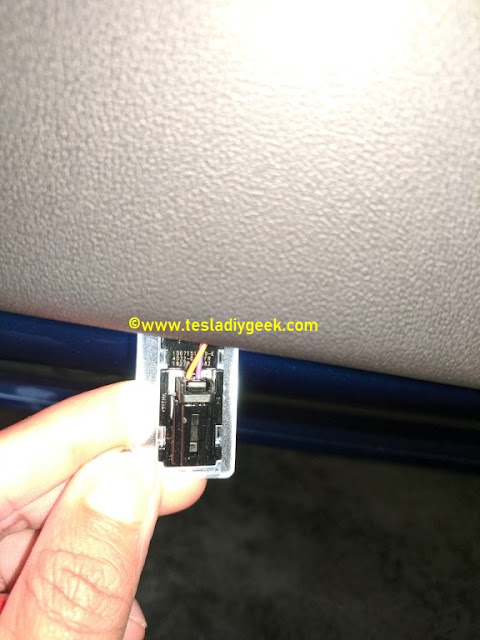 So while removal was easy. The car gives an error stating that the manual door operation has been used and to contact Tesla support. Which means that the circuit for the window up down system is tied into the light circuit being completed. So do I really want some cheap garbage led failing and causing me to be unable to open/close the door due to window in-operation or worse cause breakage the window?
The projector Tesla logo puddle lights were almost an exact match to the stock ones and had all the correct tabs, but...
Upon installation, it also turned out that the  logo lights that I got were falsely advertised as laser. They are simple cheap LEDs (not even Cree) and very very dim, had a bluish hue and caused a high pitch buzzing sound. If the puddle light cannot light up the road, exactly what good is it?

The logo pattern was misaligned even though there were a left and right label on the lights. I remembered that there was a little tab on the projector that could be adjusted align the logo. So the next step was to at least try that to get them bright and in focus. But the quality of the plastic was so bad that when I went to remove them to realign them, the tabs which hold the clear faceplate broke off  and dropped in my hand and the light assembly was left dangling inside the door. Had a heck of a time trying to fish them out and disconnect the harness. This happen on two doors of the four. I almost had to get the entire door panel off, but got lucky after 20 mins with a fishing hook I made.
What would have been worse was if the connector cables broke and the window got stuck in the manual release then being really screwed because the window will not go up and down. Try explaining that to Tesla service.

There are some things best left alone and perhaps a crappy aesthetic mod is not worth it, until either a good quality laser or bright LED light higher quality version of this type of product comes out.But I doubt I will be messing with the stock LEDs even then. Windows working properly is just a tad more important.
Posted by GTR Tech
Email ThisBlogThis!Share to TwitterShare to FacebookShare to Pinterest
Labels: Accessory
Newer Post Older Post Home