I got a notification on my phone that the there was a new software update. I was so excited to get 2020.8.1 update. I went to the car to make sure it was plugged in, because I needed it charged for the next morning. I clicked the Update button on the Tesla mobile app.

The screen in the car immediately changed to this 2 minute warning. and displayed a yellow timer logo on the top status bar.
While the update was going on, the mobile app displayed the the updated percentages and showed when the car was rebooting (Lol!)
and finally gave a notification that the update was completed.

First off, so excited about track mode V2. It appears that track mode ennables the customization of 6 different settings and saving up to 20 of these customized settings.
Additionally the option to use the dash cam as a track cam, with telemetry data saved as a CSV ,and using the a start & stop pin on the map as points to automatically record lap times.  Now that's just clear and convenient. Obviously some of the engineers at Tesla have track experience. Sweetness.
Adding Bluetooth switch audio from the phone only when the driver is in the seat and all doors are closed is also just smart, as well as a highly requested feature on Reddit. Improvements for voice command in areas of low cellular connectivity is awesome, because I have experienced this as well.
Some of the improvements that came with the major December/November (?) release that are part of the same major release followed and are here for posterity. Driving visualization improvements allows the HW3 version to detect and display stop signs, stop lights including color changes. The additional voice command were awesome. My kids love that the glove box is now voice commanded.
Said Auto Pilot Visualization Preview looks like this. I love the fact that it saw the bicycle lane and symbol. 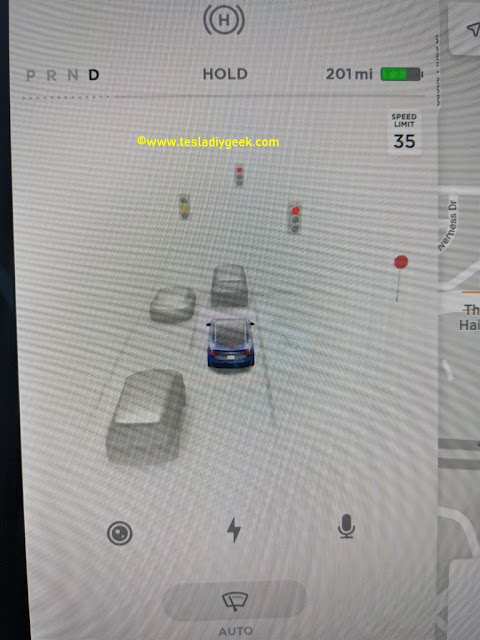 Continuing on. This was the update that added ability to read and respond to messages via voice command. Still pretty basic compared to other systems, but I am sure it will get there.
Addition of camping mode to use the car as a big ass radio and battery.  Then the addition of twitch to the Theater. Still got to get Disney+ on there to watch some Madalorian :-)
Improvement to the games included as part of the Tesla's entertainment system.
Even more game improvements, and the addition of voice keyboard and virtual musical instruments to the Sketchpad

Saving the clip on honk is an awesome feature. I have used it a few times when idiots run reds, 4-way strops and other general stupidity.
So a little more about the track mode enhancement, I had a chance to quickly flip through the screens while stopped on the way to the airport and it has two modes by default. The race preset is shown and the features that can be adjusted are:
The default settings for track mode are as below.
The default preset for drifting by contrast: