How to install Hero Me hot end cooling to and Ender 5. Stock fans. No soldering.

After much research, reading and watching reviews, I decided that a good choice to improve stock hot-end cooling would be to install the Hero Me Gen3 - CR-10/S Ender 3/Pro/5 OEM Hot-end by mediaman. This is very well thought out design with lots of attention to details. I have seen many versions of the HeroMe for the Ender 5 with aftermarket bigger fans, multiple fans, etc. but all those required soldering, which I did not want to tackle initially. So as a first stage,  I just used stock fans. I will upgrade later if for example PTEG printing requires more cooling.

The overall installation did require some minor modification after printing and some attention to detail during installation to get it perfect. Here are the simple DIY instruction for this awesome mod for the Ender 5:

I used Ultimaker Cura 4.5 slicer with the built-in Dynamic Printing Profile. The exception to default was setting bed temperature to 60 C, nozzle temperature set to 205C, print speed reduced to 70mm/s. I have a glass bed, so no need for adhesion layer. As for supports, it is very important that only "touching build plate" is used and not everywhere, as that will fill the areas inside the prints necessary for airflow. This is one of the reasons this design is awesome.

For the Ender 5, four parts needed to be printed:

The tools needed for this job will be


Unplug the entire print and let it cool down if previously hot. It is easier to work on it with access to all sides of the printer.

Remove the 4 screws that holds the cooling duct and side fan. It is important to note the top and bottom of the fan. The bottom has the bigger opening to which the duct attaches.
Next remove the 2 screws that hold the cover for the hot end cooling fan: 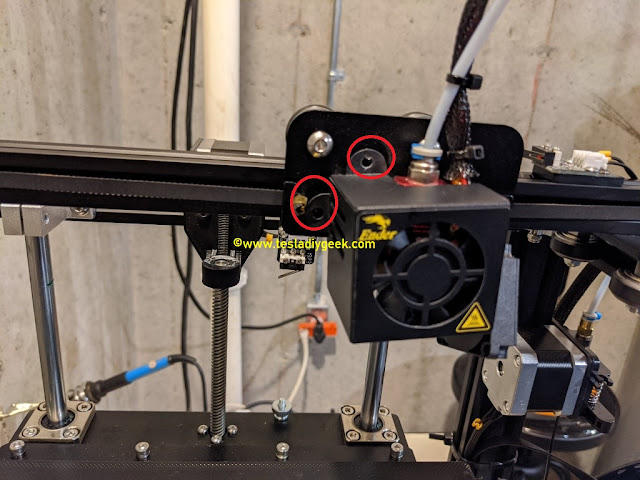 Flip the cover around and remove the 4 screws holding the cooling fan. It is important to note the direction of the flow. The label is on the inside. This is the direction it will need to go back. Removal of the fan is tricky. Despite the 4 screws removed, the fan would not budge. Bending the metal shield also does not help, but simply ruin it.

Pushing from the fan from the other side also would not help it budge either, in fact there is a risk of breaking the fan blades cover. What eventually ended up  working was using a needle noise pliers in each screw hole and tugging on the fan gently, alternating in each screw hole. There is some type of sticky lubricant behind each screw that which was holding the fan in place. Also snip off the zip ties holding the feeder tube and electrical cables.
The first modification that needs to be done is modifying the duct fan. The 2 bottom screw holes need to be modified to fit into the Hero Me duct. Initially, I had tried to modify the Hero me duct but that ended up being ruined, so I had to print another one. Basically the extra plastic around the bottom mounting holes needs to be trimmed out. This is easily done with a sharp knife. In the picture below the left one has been modified but not the right one yet. Despite this modification, it can be returned to stock easily.

Next is removal of the entire hot-end print head. The easiest way to do this is to loosen the 2 bolts that but tension on the x-axis belt
Then remove the belt from the slot on both sides of the print . * Pic taken during assembly, but it portrays the link that needs to be removed.
The easiest way to remove the entire head is to loosen the bottom pulley screw and not remove it entirely. Removing the top screws may seem like the logical approach, but with the Hero Me base on there, it will be impossible to replace and tighten the pulley screws on the top. The bottom pulley screw just needs to be loosed and the entire head can then be tilted to be removed as shown below. This makes installation of the cooling parts easier.
Step 3: Preparation
It is necessary to buy 6 machine screws that are 3mm x 8mm. I had to buy 10mm and trim off a bit as 8mm were out of stock. But 8mm are the correct length for this job. If you use longer screws they will rub against the frames of the Ender 5.
To prepare the printed parts, thread the screws through the various parts to essentially make it easy to assemble.
Thread the four screws through the Hero Me Base. These are thee screws that came off the front fan and this is where the front fan will attach to the base.
Thread the screws on the side of the base unit as per the picture below. Does not have to be all the way, just enough to tap a few threads, as it makes installation much easier.
On the sequence of small holes, tap the threads of the second hole from the bottom.
Next was test fitting everything and I noticed that the screws which hold the hot-end to the printing head plate were to close to the base unit, and since this was printed using PLA, I wanted to create a little more gap. See the close contact circled in red below.
This is where a dremmel came in handy, but again given PLA, this can be done with a file or drill bit or sharp precision knife, basically shave some of the material so that there is some gap for the hot end screws as shown below.
Step 4: Assembly

Start by placing the smaller of the two  Hero Me Base locks into the base plate and starting two of the newly bought screws/bolts from the back into the base lock plate that you printed as shown below.
Next place the base over the hot-end and position the Base Lock with no ABL (automatic bed leveler) on the left side of the hero me base. As shown below with the two holes read to accept screws. I may add an ABL later, but have found no need so far the bed has been level print after print.
Next tighten the screws from the front and from the back locking plates to hold the base against the printing head plate. The best tools to use are the ones that came in the Ender 5 assembly kit, as regular bits do not easily clear the ducts. Also tighten the two rear screws that go through the smaller locking plate installed in the base plate slit.
Make sure the hot end cables are routed properly.
Next attach the front cooling fan to the front of the Hero Me base using the silver screws that were originally used for mounting the fan. Note the direction of the fan. The sticker with words need to be on the inside.
Slide the cooling duct from the bottom onto the base and install a screw on both sides of the duct into the Hero Me base. The screws will go through the second from the bottom hole which was previously tapped. But do not tighten all the way. Just lose enough to allow the cooling duct to move slightly up and down.
Install the screw on the right side of the cooling duct into the base and start to thread into the base, but do not tighten.
Next comes the vertical alignment of the cooling duct. The objective is to have the bottom of the cooling duct be slightly above the lowest point of the extruder so that the cooling duct does not interfere with printing, but at the same time low enough to provide maximum cooling to the printed material.
The best way to align everything is to place the hot end on the bed and slightly keep adjusting the cooling duct. When the correct position is achieved, simply lock in place the left and right screws that secure the cooling duct into the base.
Next install the side cooling fan with the opening of the fan at the bottom and the trimmed pieces of the fan chassis slotting into the Hero Me cooling duct. This is why the trimming around the fan screw holes was important in preparation stage. Screw the fan using two of the four original screws that were holding the fan. It is important to use as those screws, as they are smaller and longer than the rest of the screws used.
Once everything is secured in place, return the entire print head assembly to the rail of the printer. It is easiest to place the top pulleys which has not been loosened and then tilt the head while wiggling the bottom roller assembly.
The two most important tools become the wrench and Allen key that came with the Ender 5, as these were the only tools that cleared the assembly to tighten the bottom roller.
Slot the wrench behind the hot-end and using the Allen key tighten the bolt that attaches the lower roller assembly.
IMPORTANT: Care must be taken here to ensure that as the bottom roller is tightened, that the entire print head assembly stays level and all rollers stay in their slots. The first time I attempted to tighten the the roller , it was a few degrees off angle and while it seemed was secure, the entire head shook just a little and dragged against the railing. This could have made for disastrous prints. If done properly then the head should not jiggle in any direction and move side to slide on the track very fluidly.
After assembly and before replacing the belts, move the entire head side to side and ensure it is flowing very easily, and screws which have been installed to hold the Hero Me base are NOT making any contact with the railings, only then replace the belts and tighten. First one end of the belt.
Install the other end of the belt into the slot making sure that the teeth on the belt are slotted into the motor splines properly, so as not to shred the belt upon usage.
With the belt installed and the teeth of the belt aligned into the motor properly, pull the tension plate back and put an appropriate amount of tension on the belt and tighten the two bolts shown below.

The last step is to route the wires appropriately and zip them against the Hero Me base.
The final result a beautiful and practical cooling upgrade to the ender 5 using all stock parts. 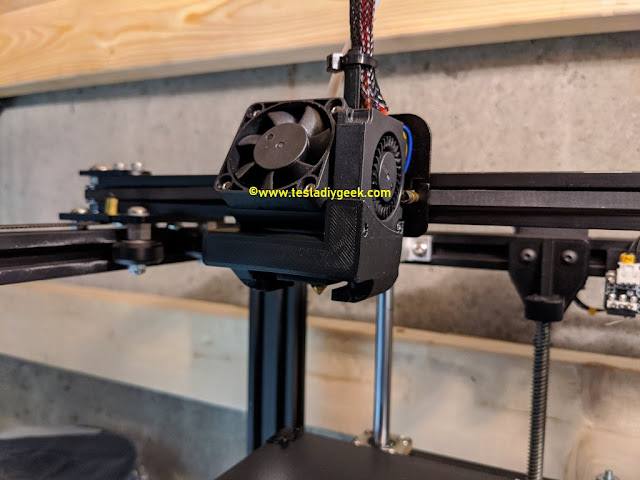 A lot can be told about the quality of engineering and design of a product when it is installed and I am very impressed with the attention to detail that has gone into the Hero Me cooling system by mediaman, my hats off to him.
Posted by GTR Tech
Email ThisBlogThis!Share to TwitterShare to FacebookShare to Pinterest
Labels: Other Random Stuff
Newer Post Older Post Home